"The Irish Matchmakers" Turning a pandemic, recession-proof business into a global franchise 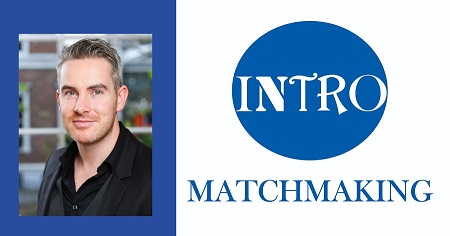 When we started our boutique, traditional matchmaking agency in the teeth of Ireland’s recession a decade ago, we had modest expectations. My wife, Rena, was CEO of group of radio stations, and I had hit my peak in residential property sales at the very height of the Celtic Tiger. We both could see our respective sectors tank slowly and we wanted to take control and be the masters of our own destinies. Debt was too hard to find (let’s not mention the bold bankers) so we needed a business with low capex requirements that played to our strengths in sales and business management. All we needed was a solid idea. That idea came when Rena spotted a man clutching a pint to his chest one night at a disco bar, alone, and clearly looking to try and meet someone. He had no wingman. We could be that wingman. Intro matchmaking was born.

At that time, landlords were practically giving space away, advertising was a tenth of ratecard, unemployment was at 15% so labour rates were at their lowest in 10 years. There couldn’t have
been a better time to start up the company. Launching in September 2010, we ran the business in our spare time – nights and weekends and very quickly revenue was strong enough to support us both full-time. Within 2 years we had outstripped any competitors in the market and seized market leadership across Ireland. When we launched there had been some small operators working as one-
man bands in the shadows, but we had a vision to popularise matchmaking, make INTRO a household name and make people comfortable talking about wanting to meet someone, instead of
feeling ashamed.

Our launch coincided with the explosion of online dating apps which, while they have their flaws, served to make dating an acceptable topic of conversation and released (some) from the
embarrassment of actively seeking out a partner. Indirectly, this benefitted INTRO as many would try online dating and perhaps have a bad experience and find us, or others would never dream of
putting their profile online but nevertheless wanted to be proactive, only in a private and confidential way.

We spent 5 years on Dublin’s exclusive Dawson Street before taking the ultimate leap to Grafton Street, one of the most prestigious shopping streets in the World – reaching our goal of bringing
matchmaking to a retail environment alongside shopping for a pair of shoes or a bottle of perfume, instead of a dark, shady experience in the burbs.

Having started out as two part-time employees, we have grown the business to 7 staff working from a full floor of offices across two Grafton Street buildings. We have thousands of members from all
walks of life, from all 32 Counties and aged 20-93 years. We have our own podcast series which features some of Ireland’s biggest names in media and we regularly get invited to contribute to
other podcasts, TV and radio shows along with frequent national press features.

Don’t let me fool you though, it has not all been plain sailing. Without any mentor that had walked the walk or really credible frames of reference in the matchmaking space, we needed to make a lot of mistakes to build a unique, successful model that would stand out. Ultimately, there was nobody in the market we wanted to be like that we could emulate – we wanted to be better, the best in fact,
so we needed to start from scratch.

We learned some extremely valuable lessons. For instance, the customer is NOT always right. In fact, in this industry quite frequently they are wrong and that needs to be gently but firmly tackled with honesty, facts and empathy, otherwise that customer will not be successful. Effectively, saying ‘yes, yes, yes’ does them no favours and just wastes their money.

To that end, we decided to treat INTRO like a business. I hear you say ‘but of course, it IS a business’, but that is not how matchmaking had been done in the past or by competitors. Those competitors
would behave a little more like a counselling service, offering a sympathetic ear, and with a tilted head customers would be told what they wanted to hear – unreasonable requests would be noted,
outrageous expectations would be humoured but of course, there was no way for that matchmaker to meet those demands and invariably end up with a disgruntled customer that goes off
badmouthing the matchmaking industry.

When we started, it took us a few months to realise that, what may have seemed like a reasonable request from a customer, was in fact, statistically unlikely to be possible. For instance, in Ireland
there are far more single women in cities and far more single men in rural areas. According to the National Census, women are twice as likely to be married if they live in rural Ireland, and twice as
likely to be single if they live in a city. Ergo, from a number’s perspective, rural men and urban women simply must meet. There are a number of other statistical anomalies that explain why
people remain single and why they need an education on why their wish-list needs to be binned. That led to us adopting some hard and fast policies that members must (contractually) agree to in order to maximise their chances of success – but not everyone likes to deviate from their notion of the perfect match.

We could see that honesty was the best policy BEFORE taking a person’s money. Add to that, from a cost-saving perspective (on advertising) we needed to ensure high success rates so that we could
grow the business through recommendations. Happy customers advertise you for free and there is no better ambassador than they.
So, instead of the woolly, touchy feely approach of our competitors, we adopted a frank and honest triage system before we offered anyone a membership which included securing agreement on our hard and fast policies. When prospective customers enquire by phone, we spend up to a half hour establishing their wants and needs and if we feel we cannot meet their expectations they are simply not offered a membership.

Naturally we will marry their preferences with logical reasons why that preference is not attainable by presenting statistics and demographics to prove our point, and if then they can accept our
position, we will welcome them in – but in a lot of cases, they will not listen to reason and that means swallowing the bitter pill of turning down a lot of business. Nobody likes to be refused and at
times our approach has been labelled ‘cold’ because it is so business-like, but in the main we find people appreciate being told the truth and not having their money wasted if we know we cannot
give them what they demand. Consequently, our success rate is very high, a third of our new clients are recommended to us through a past-member and we are the biggest agency in Ireland by a
Country mile.

That is not to say, simply being honest is all it takes. When we appeared on the Late Late show here in 2013, the World and its mother seemed to think they could set up a little matchmaking agency as a side-hustle from their kitchen table. They learned very quickly that without the proper processes, legal framework, support and formula, you simply get angry customers banging down your door demanding refunds. They quickly faded away, but unfortunately left a nasty taste in the mouth of jilted customers.

It seems though, we have developed the winning formula. When the pandemic hit last March, like most businesses, an immediate shock ran through the Company – we were all forced to work from
home and in the first month of lockdown we saw a huge impact on sales. However, we pivoted quickly and moved to virtual profile interviews and within a couple of months we were back to
normal trading levels. Nothing could prepare us for what was to come though. With rolling lockdowns came cultural shifts in attitudes to dating. Pre-Covid, 80% of people in relationships quoted college, work and socialising as where they met their partner. Since the permanent transition to remote-working, e-Learning and restricted socialising, those opportunities to serendipitously meet ‘the one’ have all but evaporated.

This has resulted in a seismic shift away from organic dating, towards organised dating services like INTRO. People are afraid of more lockdowns living alone which has accelerated need for our services. They are more likely to be reasonable and forgive of imperfections – less fussy and more open to getting serious quicker. And we have reaped the rewards. Business has grown exponentially– in June 21 we had our highest ever month in terms of revenue since we started trading. In May we raised the price of the service by 25% and continued to grow in volume. There has been a 63% increase in search activity for our company and matchmaking services. And now is the time for us to expand on that success, grow our INTRO family and make the opportunity available to others across the globe to start and own their own INTRO matchmaking company.

Earlier this year our first franchisees opened INTRO Austria from their suite of offices in Vienna. Having been approached many times about franchising our model in various countries, it was never the right fit. Pierre and Anne, however, had businesses in Austria already but Café’s and Airbnb’s (their bread and butter) were decimated in 2020 and they wanted to establish a strong business that would withstand such shocks now and in the future. They had the right amount of business acumen and sales skills to build a successful INTRO matchmaking and could delegate the running of their respective businesses to others so they could devote themselves full-time to it. So, our franchising journey has begun.

When we started to build the model and commit all of our learnings and assets to paper, we realised just how much knowledge we had accumulated over the years. The procedures, processes, marketing strategies and materials, bespoke CRM system, website template, legal frameworks, scripts, trademarks, training manuals etc. It is easy to forget when you are in the thick of the day to day, just how valuable your collective wealth of learnings and intangible assets have become. In truth, it was a thoroughly rewarding exercise and has readied us for the rapid global expansion of our INTRO model. If you or someone you know has good business and sales skills and would relish the freedom and flexibility of owning their own matchmaking business outside Ireland, then direct
them to https://www.intro.ie/franchise/ for more information.
Feargal Harrington, Managing Director Intro Matchmaking