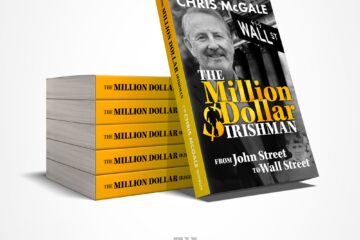 Yet, in spite of all this, he rose to become one of top Stockbrokers in the City of London.

If you’re looking for a story of someone who overcame some of the worst things life can throw at you, then you can find it all and more in The Million Dollar Irishman, a compelling new book about Chris McGale’s journey from John Street to Wall Street.

Chris will also be joining IIBN Members for a Zoom Interview on Tuesday, 16th March from 1pm to 2pm (London time) with IIBN Chair Conall O’Morain, host of That Great Business Show Podcast (which is well worth checking out).

You can register for this free event with One-click (when logged in) here: https://iibn.com/events/the-million-dollar-irishman-chris-mcgale-zoom-interview

At the turn of the Millennium, Chris McGale, was one of the City’s highest paid stockbrokers at Merrill Lynch in London. He earned a million dollars a year, owned luxury property, had the love of his life, and a new-born daughter. He was one of the biggest revenue generators in Europe, the Middle East, and Africa, but he wasn’t happy. He “hated going to work” and was burning out fast.

He was headhunted by a rival firm that looked for certain traits in prospective hires; divorced or deceased parents, the death of a sibling, or a near death experience, traits which might give someone an innate hunger for success. He was offered a golden hello contract potentially worth £3.5 million ($5m).

Then in 2002, at the height of his City career, he went on sabbatical and never went back. He had burnt out, doing too much of what he called “The too muches” – a never-ending cycle of long days, late nights, booze, gambling, and the compulsion to win.

He grew up with The Troubles in Northern Ireland. After an orphaned youth spent honing gambling skills, he returned to education at 18 and was fast-tracked to Queens University, Deloitte, and ultimately Merrill Lynch Investment Bank. Along the way he had a near-death car crash that took a year out of his life.

One review of the book on Amazon captures it perfectly: “A truly incredible piece of writing, Chris’ journey from John street to Wall Street is one that is certain to captivate and intrigue you. The Million Dollar Irish man tells the incredible tale of a man that defied the odds and survived the setbacks, to become one of the most successful men in the industry. The author offers a very honest insight into the world of investment, detailing the highs and the lows, as well his reasons for leaving the lucrative lifestyle behind him. A must read book!”

Chris McGale now lives in London with his wife and four children. This memoir traces the journey from the warring streets, through a near-death car crash, to burning out in the City.

There’s a story for everyone in this book!

You can purchase the book on Amazon here.